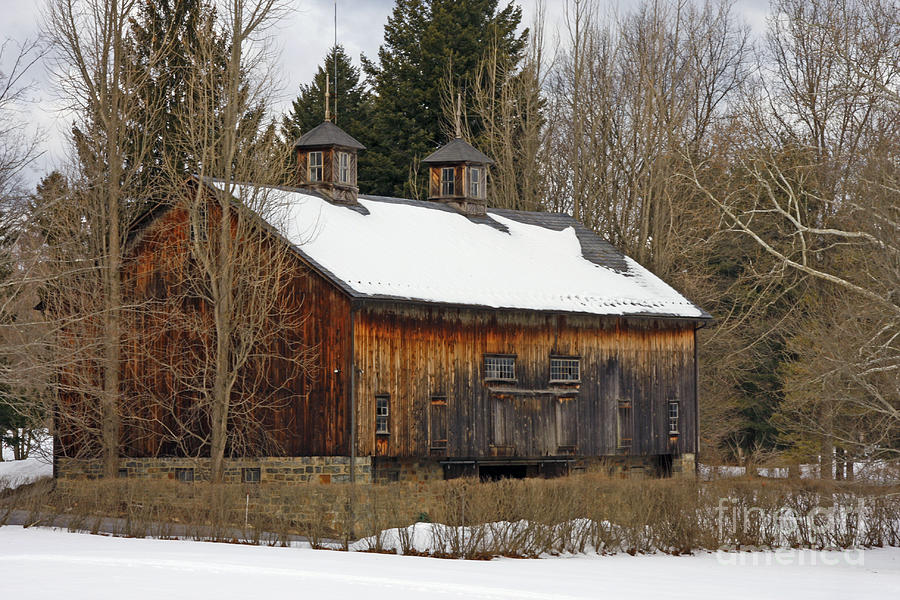 In the U.S., older barns were built from timbers hewn from trees on the farm and built as a log crib barn or timber frame, although stone barns were sometimes built in areas where stone was a cheaper building material. In the mid to late 19th century in the U.S. barn framing methods began to shift away from traditional timber framing to "truss framed" or "plank framed" buildings. Truss or plank framed barns reduced the number of timbers instead using dimensional lumber for the rafters, joists, and sometimes the trusses.[9] The joints began to become bolted or nailed instead of being mortised and tenoned. The inventor and patentee of the Jennings Barn claimed his design used less lumber, less work, less time, and less cost to build and were durable and provided more room for hay storage.[10] Mechanization on the farm, better transportation infrastructure, and new technology like a hay fork mounted on a track contributed to a need for larger, more open barns, sawmills using steam power could produce smaller pieces of lumber affordably, and machine cut nails were much less expensive than hand-made (wrought) nails. Concrete block began to be used for barns in the early 20th century in the U.S

Great shot of this old barn.

WOW, this is amazing, I love it

So captivating and interesting, love the image and the history FAV/L

Magnificent capture, Marcia! Congratulations on approaching 2,000 views for this stunning barn portrait! Seen in the 1,000 Views on 1 Image group. F/L

One of your peers nominated this image in the 1000 views Groups nominated images by your fellow artist in the Special Features #11 promotion discussion. Please visit and pass on the love to another artist.

Many thanks for the nomination, Kay!

Congratulation.....your wonderful work has been featured in the 1000 Views on 1 Image Group l/f/p

This is a beauty Marcia

outstanding capture, love these old barns and this one is unique

This barn is so photographic! Great shot.

I love the old Barn and the snow and lighting. I am back on-line now, thank you for waiting for my reply. V/F

Wonderful capture of this unique and weathered barn. l