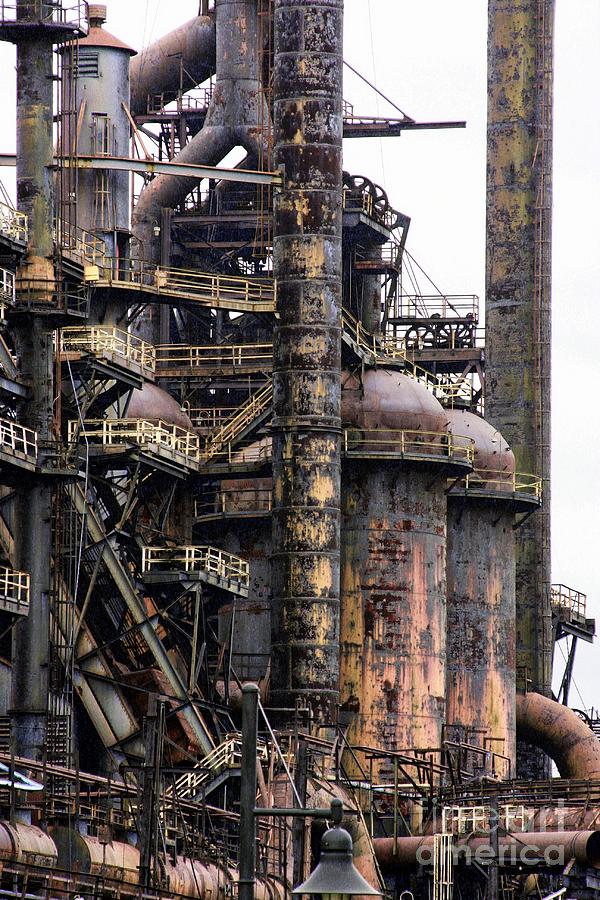 Bethlehem Steel and a subsidiary company, Bethlehem Shipbuilding Corporation, were two of the most powerful symbols of American industrial manufacturing leadership. Their demise is often cited as one of the most prominent examples of the U.S. economy's shift away from industrial manufacturing, its failure to compete with cheap foreign labor, and management's penchant for short-term profits.

After a decline in the American steel industry and other problems leading to the company's bankruptcy in 2001, the company was dissolved and the remaining assets sold to International Steel Group in 2003. In 2005, ISG merged with Mittal Steel, ending American ownership of the assets of Bethlehem Steel.

I love this industrial image Marcia!

I Love this great capture of industrial history. 👍

This is an amazing industrial architecture composition, Marcia, love the patina and textures!

Hi Marcia…I like your image. A totally cool structure and definitely one I would love to see and photograph. Excellent presentation…Cheers Bob fv

Wonderful photographic artistry and capture of the form and function of the shapes!!! -Tweet!

Love this capture, Marcia... Industry has such a place in my heart!

Beautiful image! It calls to mind the works of Charles Demuth!

Thank you, Angela, for favoring this image!

Thank you, Thomas, for favoring this image!

Wow what a fascinating capture, like a bit of steam punk sculpture, very inspiring LF